At St. Charles Borromeo Seminary near Philadelphia on Sunday, Pope Francis condemned child abuse and promised to take action against perpetrators in the Roman Catholic Church.

PHILADELPHIA — At the start of an otherwise joyous and well-received trip to the United States, Pope Francis infuriated some abuse victims when he praised American bishops for their handling of the sexual abuse scandal and told priests that he felt their pain.

On the last day of his journey, Francis stepped to a lectern here before hundreds of seminarians and bishops from around the world and tried to salve the open wound. He said he had met in private with a group of victims and pledged that “all responsible will be held accountable.”

“God weeps” at the sexual abuse of children, he said in a translation from Spanish of his remarks added to the start of a scripted address in the chapel at St. Charles Borromeo Seminary here on Sunday. “I commit to the careful oversight to ensure that youth are protected.”

His remarks and the meeting, anticipated for weeks and carefully choreographed, were greeted with varying degrees of skepticism by abuse victims who have now seen two popes on American trips meet with victims and make sweeping promises to protect children. They would like to believe that Francis’ words are sincere and pledges are real, but they continue to have serious doubts, in part because of his comments last week, and because of how Sunday’s gathering came together.

Some of the victims who met with the pope had been abused by relatives or educators — not all by Catholic clergy.

The Rev. Federico Lombardi, a Vatican spokesman, said this had been done intentionally to show that the church is taking a “larger perspective” on the problem of sexual abuse. He added that the pope had waited to make these remarks until Sunday, when he was scheduled to address an international group of bishops, because “we know the problem is a universal problem, in the universal church, and also in society.”

Many victims said they were outraged by what looked like an attempt to minimize the church’s role in enabling or covering up for abusive priests by offering a reminder that child sexual abuse is not solely a Catholic phenomenon.

A pope whose most salient quality is his pastoral approach to real people and their real-life problems appears to have a blind spot when it comes to victims, many of them said. In his first remarks on the issue to an American church that has indeed suffered from the revelations of abuse, the pope chose to comfort and praise his fellow clerics, and said nothing at all about the victims.

Instead, he told bishops and priests that he felt their pain and suffering. And he praised the bishops — some engaged in continuing legal battles with abuse victims — for their “courage” and their “generous commitment to bring healing to the victims.”

“It was shocking and insulting, and it is hurtful,” said John Salveson, an abuse survivor and a businessman who runs the Foundation to Abolish Child Sex Abuse, based in Philadelphia. “I don’t know how you could make a case that would support these comments.”

Even a member of the Pontifical Commission for the Protection of Minors, a special panel that Francis appointed, was taken aback. The member, Marie Collins, who is a survivor of abuse, said in an email, “Like so many other survivors I found the comments disappointing.” But she said she did not want to say more because she was trying to “stay positive” and continue her work on the commission.

For a churchman known for his empathy for the marginalized and his insistence on dialogue and what he calls “encounter,” Francis has seemed reluctant to encounter abuse victims. As the archbishop of Buenos Aires, before he became pope, Francis declined to meet with abuse victims and their families who say they begged to talk with him, according to news reports and several victims interviewed in Argentina last year.

Since becoming pope, Francis has taken steps to address the abuse problem, but has not made it a top priority. His only known encounter with abuse victims came 15 months into his papacy, when he celebrated Mass with six victims, then met with them individually over three hours.

“I beg your forgiveness,” he told them, “for the sins of omission on the part of church leaders who did not respond adequately to reports of abuse made by family members, as well as by abuse victims themselves.”

Francis’ predecessor, Pope Benedict XVI, met with abuse victims at least five times during foreign trips: in the United States, Australia, Malta, Britain and Germany, according to BishopAccountability.org, which tracks cases and advocates for survivors. Francis has traveled to 15 countries as pope, but had not met with any survivors of clergy sexual abuse until Sunday.

However, he has appointed a commission on sexual abuse that includes victims, lay experts, clergy and bishops, and that has made recommendations for Vatican policy. The commission encouraged the pope to set up a process for holding accountable those bishops who covered up abuse, and in June the Vatican announced the creation of a Vatican tribunal for judging bishops accused of negligence.

Francis appears to have accepted the resignations of three American bishops who were in the midst of escalating scandals over their mishandling of abuse allegations: two bishops in Minnesota in June and one in April in Kansas City-St. Joseph in Missouri, where the bishop was the first to ever be criminally convicted of shielding a pedophile priest. But the bishops were allowed to leave office without the Vatican’s ever making clear why, and all three remain bishops. 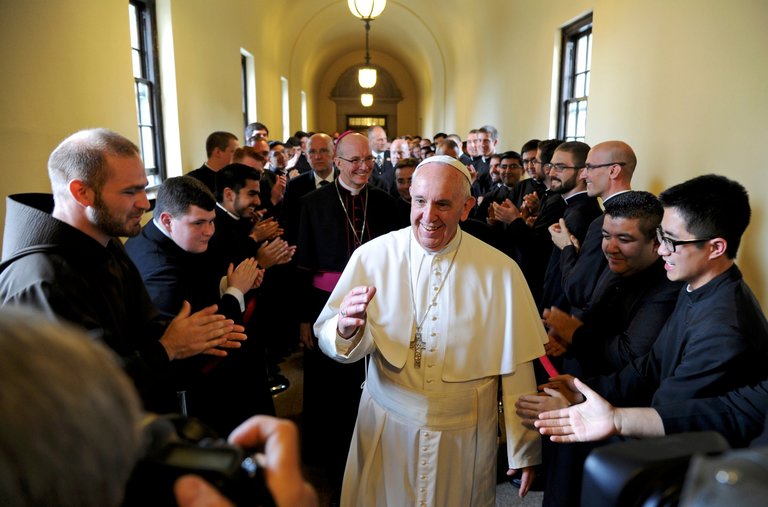 Highlights of Pope Francis’ Remarks in the U.S.

Over six days, the pope addressed Catholics and non-Catholics alike as he pleaded for environmental stewardship and compassion for immigrants and the poor in the halls of power.

The abuse scandal has hardly died down in the United States. On Tuesday, the day Francis arrived in the United States, a priest in Pennsylvania was convicted of abusing boys in an orphanage he supported for years in Honduras. The Archdiocese of Milwaukee just proposed a plan to settle claims with an estimated 570 victims in bankruptcy court.

Philadelphia, the pope’s last stop on his visit, has also been a site of continued pain and scandal. Two grand juries have found many accused priests still serving in ministries. A high-ranking church official was convicted in 2012 and is now in prison for covering up abuse. In fact, until recently he was in the same prison that Francis visited on Sunday, according to local news reports.

Francis’ addresses in the United States reopened the wounds for many victims. At a prayer service with bishops at the Cathedral of St. Matthew the Apostle in Washington on Wednesday, the pope said he was “conscious of the courage with which you have faced difficult moments in the recent history of the Church in this country without fear of self-criticism and at the cost of mortification and great sacrifice.

“Nor have you been afraid to divest whatever is unessential in order to regain the authority and trust which is demanded of ministers of Christ,” he said. “I realize how much the pain of recent years has weighed upon you, and I have supported your generous commitment to bring healing to victims — in the knowledge that in healing, we, too, are healed — and to work to ensure that such crimes will never be repeated.”

The next day, at St. Patrick’s Cathedral in New York, Francis told clergy that they had “suffered greatly in the not distant past by having to bear the shame of some of your brothers who harmed and scandalized the Church in the most vulnerable of her members.”

At a two-person protest on Saturday outside a Catholic church in Philadelphia, Barbara Dorris, an abuse survivor and an organizer with the Survivors Network of Those Abused by Priests, said, “It’s all about the bishops. The victims got ignored.” 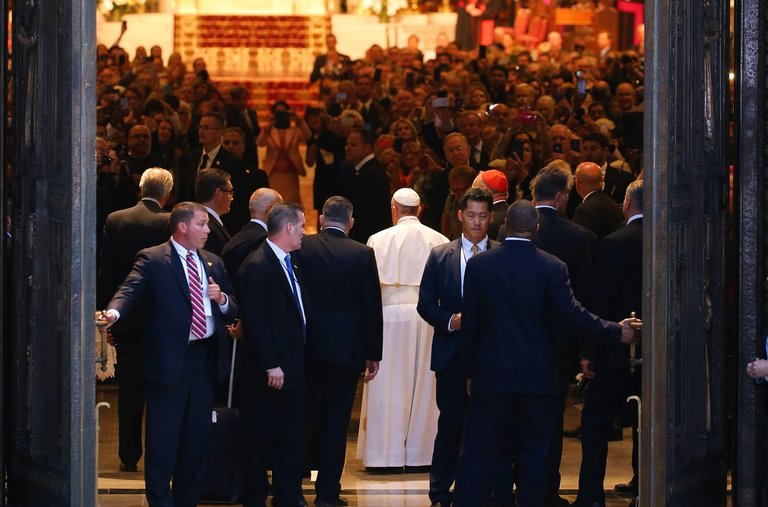 Moments of Strength and Vulnerability

The pope made public appearances and shared private moments among the people and the powerful in Washington.

Karen Polesir, whose cousin was abused by a priest, said of Francis: “I honestly thought that he got it. But after those statements, I knew he clearly didn’t get it at all.”

Church officials were hoping that Francis’ remarks on Sunday after he met victims would speak louder than anything he had said earlier in the trip on the abuse issue.

Francis told the small group of survivors and those accompanying them, “Words cannot fully express my sorrow for the abuse you suffered,” according to a transcript provided by the United States Conference of Catholic Bishops. “I am deeply sorry for the times when you or your family spoke out, to report the abuse, but you were not heard or believed. Please know that the Holy Father hears you and believes you.”

In unusually candid remarks, he acknowledged that some bishops were negligent, others even abused children themselves: “I deeply regret that some bishops failed in their responsibility to protect children. It is very disturbing to know that in some cases bishops even were abusers. I pledge to you that we will follow the path of truth wherever it may lead,” Francis said.

The Rev. Thomas Rosica, a Vatican spokesman, said the pope’s remarks at his meeting with abuse victims were “the strongest he’s spoken about the abuse.”

But for many victims, Francis’ comments were not enough to overcome their sense of disappointment. Kenneth M. O’Renick, 72, who was 6 when a priest abused him at his parish school in Kansas City, was brimming with optimism about Francis before he arrived.

Then he heard what the pope had said to American bishops in Washington about their courage and generosity in the face of the sexual abuse crisis. The pope’s praise for the bishops, Mr. O’Renick said, made his promises to protect youths and hold abusers accountable on Sunday “ring hollow, very hollow, to me.”

“He has not even come close to what needs to be done, in my opinion,” he said. “I hope that it gets better, but I’m certainly not as hopeful as I was.”

Traders on the NYSE floor react to S&P downgrade

4 charged in scheme to sell baby to child molester