President Trump selected Judge Kavanaugh to replace Justice Anthony M. Kennedy, who is set to retire. If confirmed, Judge Kavanaugh would cement a conservative hold on the court.

Presenting Judge Kavanaugh at the White House, Mr. Trump described him as “one of the finest and sharpest legal minds in our time,” and declared him a jurist who would set aside his political views and apply the Constitution “as written.”

The nomination of Judge Kavanaugh, 53, a federal appeals court judge, former aide to President George W. Bush and onetime investigator of President Bill Clinton, was not a huge surprise, given his conservative record, elite credentials and deep ties among the Republican legal groups that have advanced conservatives for the federal bench.

But his selection will galvanize Democrats and Republicans in the months before the midterm elections. Moments after the announcement, the Senate Democratic leader, Chuck Schumer of New York, declared, “I will oppose Judge Kavanaugh’s nomination with everything I have.” Senator Mitch McConnell of Kentucky, who leads the barest of Republican majorities, had expressed misgivings about his path to confirmation, but said he was a “superb choice.”

Justice Kennedy, who is retiring, held the swing vote in many closely divided cases on issues like abortion, affirmative action, gay rights and the death penalty. Replacing him with a committed conservative, who could potentially serve for decades, will fundamentally alter the balance of the court and put dozens of precedents at risk.

Judge Kavanaugh’s long history of legal opinions, as well as his role in some of the fiercest partisan battles of the last two decades, will give Democrats plenty of ammunition for tough questions. Nearly 20 years ago, working for the independent counsel Kenneth W. Starr, he laid out broad grounds to impeach Mr. Clinton — words that Democrats can now seize on to apply to Mr. Trump and the Russia investigation.

In choosing Judge Kavanaugh, the president opted for a battle-scarred veteran of Republican politics but also someone with close ties to the Bush family — a history that aides to Mr. Trump said he viewed as a strike against him and had to overcome.

Before serving Mr. Bush in the White House, Judge Kavanaugh worked for him in the 2000 presidential vote recount in Florida. When Mr. Bush nominated him in 2003 to the United States Court of Appeals for the District of Columbia Circuit, Democrats complained that he was too partisan. He survived a contentious confirmation hearing and was confirmed in 2006.

In his remarks, Judge Kavanaugh, who once clerked for Justice Kennedy, said he would “keep an open mind in every case.” But he declared that judges “must interpret the law, not make the law.”

Democrats are still bitter that Republicans blocked President Barack Obama’s nomination of Judge Merrick B. Garland to fill the last Supreme Court vacancy, created by the death of Justice Antonin Scalia in 2016. Republicans denied Judge Garland a hearing, arguing that the right to name a justice ought to be left to Mr. Obama’s successor. 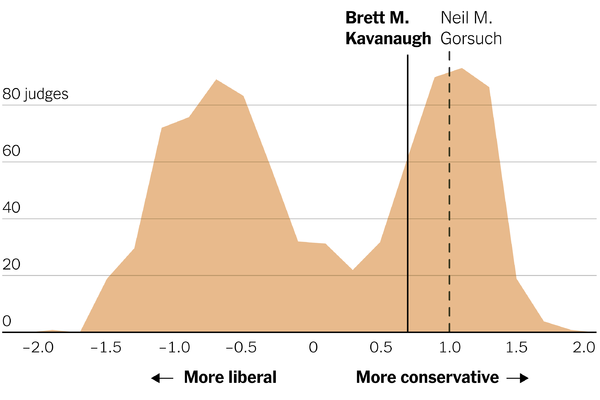 Where Kavanaugh, Trump’s Nominee, Might Fit on the Supreme Court

President Trump’s selection, Brett M. Kavanaugh, is a Washington insider who appears unlikely to drift left as other conservative justices have.

Mr. Trump chose Justice Neil M. Gorsuch, who has voted much as Justice Scalia had, leaving the court’s ideological dynamic basically intact. Replacing Justice Kennedy will be far more consequential, almost certainly thrusting Chief Justice John G. Roberts Jr., whose voting record has been more conservative than that of Justice Kennedy, into the crucial median position on the court.

For Mr. Trump, whose presidency has been marked by personnel upheaval, an uneven legislative record and persistent questions over his ties to Russia, the nomination offers a chance for a clear victory — one that would leave a lasting imprint on one of the nation’s most cherished institutions. It also fulfills, for a second time, Mr. Trump’s promise to his political base to name conservative judges in the mold of Justice Scalia.

As he did in choosing Justice Gorsuch, Mr. Trump turned the selection process into a kind of Supreme Court sweepstakes, conducting a parade of interviews, promising a blockbuster choice and stretching out his decision-making over a weekend at his golf club in New Jersey before the prime-time appearance at the White House.

Mr. Trump did not make a final decision until the last 24 hours, but he began logistical preparations for Judge Kavanaugh’s appointment earlier in the weekend, according to a person familiar with the planning.

The president extracted a last bit of suspense from the process, appearing alone at the podium in the East Room to pay tribute to Justice Kennedy and the widow of Justice Scalia, Maureen, before announcing Judge Kavanaugh, who entered from a side door with his wife, Ashley, and daughters, Margaret and Liza.

But there was less underlying drama than Mr. Trump’s theatrical approach suggested. As he did last time, the president chose from a list of two dozen candidates, carefully curated for him by the Federalist Society, which functions as a pipeline to supply conservatives to the federal bench.

While there are ideological differences among them — Judge Barrett is an outspoken social conservative, while Judges Kavanaugh, Kethledge and Hardiman are viewed more as pro-business, law-and-order judges — all four have compiled uniformly conservative records.

One of the things that set Judge Kavanaugh apart, aides to Mr. Trump said, was his Ivy League pedigree: He is a graduate of Yale and Yale Law School. He also impressed Mr. Trump during his interview, and was enthusiastically backed by the White House counsel, Donald F. McGahn II.

For Democrats, the nomination sets up a political battle they are likely to lose. While Republicans hold a razor-thin margin in the Senate — Senator John McCain’s absence because of his brain cancer reduces it to 50 seats — a handful of Democrats might vote for the nominee, particularly those running for re-election in states whereMr. Trump won in 2016 and is still popular.

Among Democrats facing that dilemma: Heidi Heitkamp of North Dakota, Joe Donnelly of Indiana and Joe Manchin III of West Virginia. All three voted to confirm Justice Gorsuch. Bob Casey, a Pennsylvania Democrat who is also up for re-election, made his intention to reject Mr. Trump’s choice clear hours before he even announced it.

“I will oppose the nomination the president will make tonight because it represents a corrupt bargain with the far right, big corporations and Washington special interests,” Mr. Casey said in a statement.

However slim his odds of success, Mr. Schumer framed the confirmation battle as a referendum on the issues most important to Democratic voters, notably health care.

“Enormously important issues hang in the balance,” he said in the Senate before the announcement. “The right of workers to organize, the pernicious influence of dark money in our policy, the right of Americans to marry whom they love, the right to vote.”

Republicans hope the appointment will mobilize their voters as well. But the choice of Judge Kavanaugh is perhaps the most challenging of the four finalists, with lawmakers warning that his voluminous record could prolong the confirmation process, even past the November election.

Mr. McConnell told the president that Judges Hardiman or Kethledge would have an easier path to confirmation. He worried about his independent-minded Kentucky colleague, Senator Rand Paul, who has bitterly criticized the foreign policy of the Bush administration and might use that as grounds to hold up Judge Kavanaugh’s nomination.

Though Mr. Trump was bothered by Judge Kavanaugh’s connection to Mr. Bush, according to people who spoke with him, he was able to get over it, in part because he believed that Judge Kavanaugh would embody the tradition of Justice Kennedy.

Judge Kavanaugh was also not the first choice of many anti-abortion and conservative religious leaders, but they quickly praised his selection, sensing they may be closer than ever to overturning Roe v. Wade, the landmark 1973 decision establishing a constitutional right to abortion.

“It is simply good news,” said Marjorie Dannenfelser, the president of the anti-abortion Susan B. Anthony List. “What will really matter is whether abortion law will change or not.”

Judge Kavanaugh played up his credentials as a family man on Monday, mentioning that he coached basketball for his daughters. He spoke of the influence his mother had on him, noting that she was a teacher turned lawyer and later judge in his native Maryland, who practiced her closing arguments at the family dinner table.

The White House will roll out an intensive campaign to sell the nominee to the Senate and the American public. Judge Kavanaugh will embark on a busy schedule of courtesy calls to key members of the Senate Judiciary Committee and other senators. The White House named Jon Kyl, a Republican former senator from Arizona, to help shepherd the nominee during his confirmation hearing. Mr. Kyl, the White House noted, served on the Senate Judiciary Committee during the confirmations of four of the last five Supreme Court justices.

Mr. Trump will also play a prominent role in promoting the credentials of Judge Kavanaugh, though his task will be complicated by the fact that he leaves on Tuesday for a weeklong trip to Europe for a North Atlantic Treaty Organization summit meeting and one-on-one meeting with President Vladimir V. Putin of Russia.

Ohio house comes down where remains of 11 found

Official has regrets in gun-smuggling controversy