Dr. Ronny L. Jackson in January. The White House has withdrawn his nomination to become the next Veterans Affairs secretary.

WASHINGTON — To senior White House aides serving the last three presidents, Dr. Ronny L. Jackson was the war-tested doctor who served in Iraq, helped them cope with their high-pressure jobs and ran his medical staff with the rigor befitting his rank of rear admiral in the Navy.

But inside the White House medical unit, a military-run office with a few dozen doctors and nurses, Dr. Jackson was viewed as a bully and someone who kept sloppy medical records, drank too much and loosely dispensed strong drugs to curry favor with the powerful politicians and political aides he admired. Three current and former colleagues said that Dr. Jackson was sometimes intoxicated during overseas trips and that staff members were often ordered to leave a bottle of rum and a Diet Coke in his hotel room.

On Thursday, Dr. Jackson withdrew from consideration to join President Trump’s cabinet as the secretary of Veterans Affairs after those and other allegations about his behavior cascaded into public view. Dr. Jackson, Mr. Trump and numerous White House officials dating to the Obama presidency insisted none of it was true.

“These false allegations have become a distraction for this president,” Dr. Jackson said.

Dr. Robert G. Darling, a former White House physician to President Bill Clinton and a retired Navy emergency medicine doctor, said, “This is a guy who served this country, who is in this job pretty reluctantly, and now he’s getting hung out to dry.”

But in a White House where everybody appears to be in everyone else’s business, a picture has emerged of a medical unit oddly disconnected from the larger executive offices of the president, where a small team of military medical professionals reports up a narrow chain of command out of view from the political realm. Witnesses to Dr. Jackson’s behavior spoke on the condition of anonymity because they continue to serve in the military.

Dr. Jackson’s medical unit operates inside the White House, not far from the West Wing, where the president and his aides work. But an isolated managerial bubble allowed Dr. Jackson to serve three presidents for a decade while escaping scrutiny of alleged abuses of power and position. Dr. Jackson’s employees were not subordinates of the White House chief of staff or the president’s lawyer. Instead, the medical unit reported through a military chain of command to the little-known White House Military Office.

When work conditions grew intolerable in the unit, it was the Navy’s inspector general that stepped in, rendering a judgment in 2012 that the environment was “toxic” and that one or both of the top two doctors, including Dr. Jackson, should go. But little appears to have changed.

In interviews with more than 24 people — including some of Dr. Jackson’s former subordinates and a dozen White House political aides in the Trump and Obama administrations — officials said members of the medical and political staffs hardly came into contact with one another outside of routine medical treatment. They operated under different rules of behavior and rarely socialized together, even on long trips to foreign countries.

Mr. Trump’s decision to nominate Dr. Jackson to lead the Department of Veterans Affairs, the second-largest bureaucracy in the federal government, brought the two worlds into collision, surfacing allegations against Dr. Jackson that may otherwise never have emerged.

The aftermath has raised difficult questions for officials in all three administrations, who either did not know about the accusations or looked the other way. Some said they were vaguely aware of complaints from Mr. Jackson’s subordinates about his abrasive manner, which several described as frat-boy behavior; most said they largely dismissed it as griping from employees who belonged to a separate chain of command. 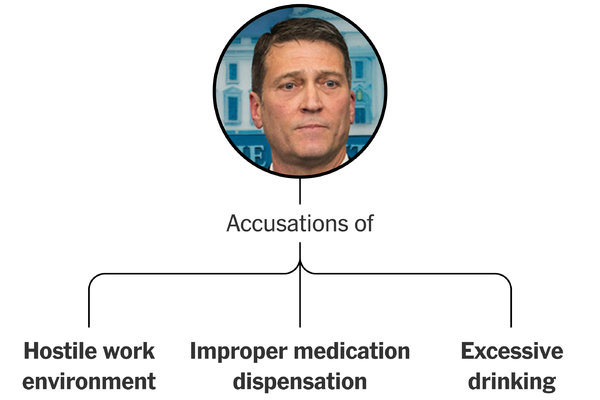 A History of Ronny Jackson in Fewer Than 70 Words

“I didn’t see any of the alleged behaviors,” said David Axelrod, who served as Mr. Obama’s senior adviser from 2009 to 2011. “My experience was consistently positive.”

A few said they had heard whispers of drinking, though all of the former White House officials said they never saw him drunk on the job. But many said Dr. Jackson earned the nicknames “Candyman” and “Dr. Feelgood” because he dispensed sleeping pills, muscle relaxants and other drugs with such ease.

One former senior White House aide who traveled regularly with the president said Dr. Jackson was known to be an eager and generous provider of Ambien, a sleep aid, and Provigil, a drug that promotes wakefulness, to staff members on presidential trips, which he would dispense in plastic baggies on Air Force One. The former aide said Dr. Jackson also doled out stronger substances, such as Xanax and the addictive opioid Percocet, readily offering them when he believed they might be helpful.

“Hey, you’re going through a tough time,” he would say, according to the former aide, who spoke on the condition of anonymity. “Why don’t you take a bottle of this?”

Mr. Trump lamented on Thursday Dr. Jackson’s decision to withdraw from consideration, calling him “an admiral, highly respected, a real leader” during a telephone call to “Fox & Friends.” The president added: “These are all false accusations. These are false. They’re trying to destroy a man.”

And friends of Dr. Jackson said that they were stunned by the allegations, and insisted that he must be the victim of disgruntled former colleagues who are trying to derail a successful career.

“I’ve literally never heard a bad word said about him by anybody that I know who’s worked with him,” said Dr. Gregory Ciottone, an associate professor of emergency medicine at Harvard Medical School. “By my own personal experience, he’s really incredibly highly respected and just a good person.”

Dr. Darling, who said he had breakfast recently with Dr. Jackson at the Army and Navy Club in Washington, said he never heard any rumors or speculation about alcohol abuse. He said it was unlikely to be true given the kind of security clearances that Dr. Jackson requires to do his job.

“Top Secret, it’s called Yankee White,” Dr. Darling said. “That means you’ve got direct access to the president of the United States. We go up to his personal residence. We can go there unaccompanied without the Secret Service or anything. Not too many people get to do that.”

Dr. Jackson’s appointment to the White House medical unit came after a stint in western Iraq from 2005 to 2006, during some of the worst months of the conflict, where Americans were killed and maimed almost daily from roadside bombs, insurgent attacks and snipers.

He was stationed at Al Taqaddum air base, a key hub wedged between Falluja and Ramadi, where he worked with a shock trauma platoon as the physician in charge of resuscitative medicine. In 2005, Al Taqaddum was one of three bases in one of the more volatile parts of Anbar Province that had such a platoon.

The small team of doctors and nurses often acted as the first line of medical care after an American was injured on the battlefield, providing emergency-room level care and conducting field surgical procedures before stabilizing patients and airlifting them to a larger air base.

At the White House, his service was hailed by the three presidents he served. In 2016, as President Barack Obama prepared to leave office, he called Dr. Jackson “an exceptional physician and leader” who as the official presidential doctor had “earned my complete trust and respect.”

But those who worked closely with Dr. Jackson in the medical office insist that he was skilled at promoting himself to the president and top White House aides, even as he treated his nurses and doctors badly.

Three former employees of the medical unit said Thursday that they had made official complaints with the legal counsel of the White House Military Office or other leaders in the unit as far back as the Obama administration. All three said the complaints seemed to go unaddressed. Officials with the military office did not respond to requests for comment.

One person familiar with the medical unit recalled an overseas trip during the Obama administration in which Dr. Jackson showed up to board Air Force One after a day of drinking. The person, who had firsthand knowledge of the episode, said there was no choice given Dr. Jackson’s place in the chain of command but to give him the medical bag and allow him to board the plane, where he would be the primary physician attending to Mr. Obama on a long international flight.

The same person expressed awareness of multiple episodes in which Dr. Jackson asked subordinates to write themselves prescriptions for controlled drugs, pick them up, then deliver them to him for administration to patients. One former colleague described similar situations.

White House officials said Thursday that despite the allegations, Dr. Jackson remains in his role as the president’s physician, one he has filled since 2013. In January, Dr. Jackson praised Mr. Trump’s “excellent” health after conducting a battery of tests and examinations for his annual physical, earning plaudits from the president and scorn from Mr. Trump’s critics.

Sarah Huckabee Sanders, the White House press secretary, said in a statement only that Dr. Jackson “is a doctor in the United States Navy assigned to the White House and is here at work today.”

Ivanka Trump, the president’s daughter and senior adviser at the White House, tweeted her support for Dr. Jackson.

“Admiral Ronny Jackson is a man of exceptional integrity, character and intellect,” she wrote on Thursday. “We are grateful for his long and distinguished service to our Nation and look forward to continuing to see his warm smile each day at the White House!”