Yanny or Laurel? How a Sound Clip Divided America

Three years ago, the internet melted down over the color of a dress. Now an audio file has friends, family members and office mates questioning one another’s hearing, and their own.

Is the voice saying “Yanny” or “Laurel”?

The clip and an online poll were posted on Instagram, Reddit and other sites by high school students who said that it had been recorded from a vocabulary website playing through the speakers on a computer. 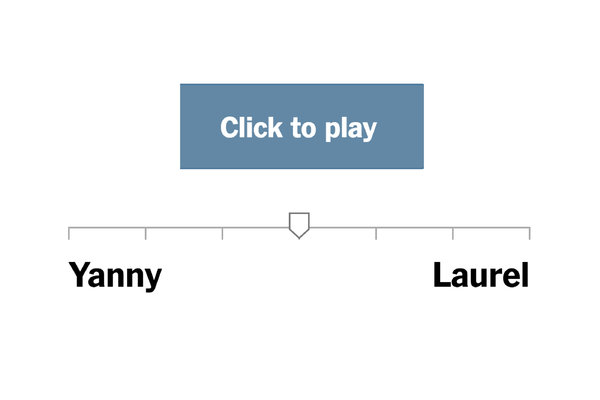 How far do you have to move our slider to hear one name or the other?

An 18-year-old high school student in Lawrenceville, Ga., Roland Szabo, was the first to post it on Reddit, where it quickly took off. At first, he claimed he had made the audio file himself. But on Thursday Mr. Szabo credited the students identified by Wired as creators of the Instagram post, saying he had been caught up in the media excitement.

[It’s not over yet: Yanny or Laurel? The Trump White House wants to play, too.]

Social media bragging rights aside, the source of the clip may frustrate some and vindicate others: the vocabulary.com page for “laurel,” the word for a wreath worn on the head, “usually a symbol of victory.” Sorry, Team Yanny.

Sharing of the poll really took off Tuesday after the tweet below from a self-described YouTube “influencer” named Cloe Feldman, which was featured in too many news articles to count (including an earlier version of the one you are reading).

On Tuesday evening, Ms. Feldman said in a video that she was fielding multiple interview requests and searching for the original creator.

“I did not create Yanny vs. Laurel,” she said. “I don’t know how this was made.”

It didn’t take long for the auditory illusion to be referred to as “black magic.” And more than one person online yearned for that simpler time in 2015, when no one could decide whether the mother of the bride wore white and gold or blue and black. It was a social media frenzy in which internet trends and traffic on the topic spiked so high that Wikipedia itself now has a simple entry, “The dress.”

[Read more about the dress, which was definitely blue and black — or was it? — here.]

Many audio and hearing experts have weighed in.

Jody Kreiman, a principal investigator at the voice perception laboratory at the University of California, Los Angeles, helpfully guessed that “the acoustic patterns for the utterance are midway between those for the two words.”

“The energy concentrations for Ya are similar to those for La,” she said. “N is similar to r; I is close to l.”

Patricia Keating, a linguistics professor and the director of the phonetics lab at U.C.L.A., said: “It depends on what part (what frequency range) of the signal you attend to.”

Elliot Freeman, a perception researcher at City University of London, said our brains can selectively tune into different frequency bands once we know what to listen out for, “like a radio.”

“What one hears first depends on the how the sound is reproduced, e.g. on an iPhone speaker or headphones, and on an individual’s own ‘ear print’ which might determine their sensitivity to different frequencies,” he said.

While the experts theorized, online sleuths were hard at work manipulating the bass, pitch or volume.

Some speculated, like Dr. Keating, that the differences might be related to hearing loss or the age of the listener. It is known that some sounds are audible only to people under 25.

“If you turn the volume very low, there will be practically no bass and you will hear Yanny,” a Reddit user wrote confidently.

Yet making those adjustments did not change the word for some.

“I literally just turned all frequencies below 1khz to negative 70 decibels and I still hear ‘laurel,’” someone said on Reddit. Others heard different sounds on different equipment, while still others claimed to hear both.

The musician Yanni, for his part, said his ears weren’t deceiving him.

With time, a definitive scientific explanation will probably surface, like the one given for the dress, which had much to do with lighting.

In the meantime, use our handy tool to baffle your friends and astound your enemies, until the next random internet phenomenon has you doubting your own senses.

To Sate China’s Demand, African Donkeys Are Stolen and Skinned

Mars Is Frigid, Rusty and Haunted. We Can’t Stop Looking at It.